Lee's in Africa and Jen is taking over this Sunday's movie and she's picked a winner... 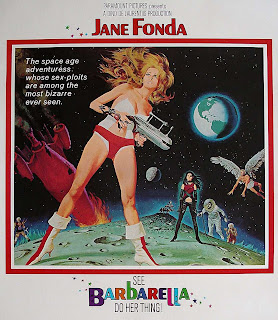 Barbarella
Sunday, Sept 13th @ 10pm
on the Blind Lady Old "School" Screen
Set in the 40th century, Barbarella follows the adventures of its title character played by Jane Fonda. In the film, Barbarella is assigned by the President of Earth to retrieve Doctor Durand Durand from the planet SoGo in order to save the earth. Beyond this premise, the plot is very loose, serving mostly as an excuse for Barbarella to end up in erotic situations. On her quest to find Durand Durand, Barbarella is seduced by a human resident of SoGo, who introduces her to penetrative intercourse (civilized people of Barbarella's society find sexual release through pharmaceuticals), seduces an angel named Pygar, and overloads a torture device (called the Excessive Machine) which kills through sexual pleasure.
Watch the original Trailer
Posted by Are We There Yet?