Thanks to TapHunter for the write up...

TapHunter.com’s American Craft Beer Week blogging series continues with an in-depth look at brewer Lee Chase’s efforts to raise the beer bar (part 1 and 2 here). Above: Chase writing up his beer offering for the first in a series of coffee beers by Automatic Brewing. More on Chase’s coffee series and what we can expect to drink by summer time, below. 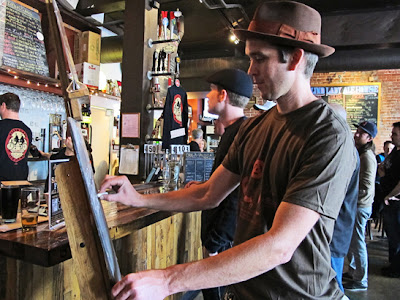 Artisan pizza pies from Blind Lady Ale House decorate the cover of this month’s San Diego Magazine, the perfect snack to accompany Candace Woo’s Critic’s Pick for ‘Best Craft Beer Selection’ in town. BLAH’s curated selection of craft beers from around the world to those small batches made in-house represent brewer Lee Chase’s dedication to quality, a relevant concern as San Diego breweries and pubs grow in numbers. Curious to find out more on Chase’s quest to raise the beer bar, TapHunter.com asked a few questions exploring BLAH’s involvement with the Honest Pint Project, the quest for clean beer, and an expansion for Automatic Brewing Company debuting this summer.
TapHunter: What did you learn at Stone Brewing Company that you still put to use and think about in your endeavors at Blind Lady and/or Automatic Brewing Co?
Chase: Undoubtedly, I learned a ton from my years working at Stone: We grew the brewery from 0-55,000 barrels of beer per year over the 9+ years I was there. However, a lot of that growth was applying what I’d learned from studying Malting & Brewing Science at UC Davis. Read More...
Posted by blind lady ale house