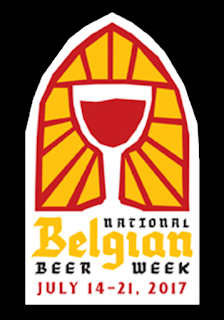 Did you know this week is Belgian Beer Week? Probably not since this is the 1st Annual event and we're pretty much the only ones in town celebrating.

Here's the lowdown. This week kicks off with the 7th annual North American Belgian Beer Fest (July 14-15) in Westland, MI and last year there were over 1,000 attendees, more than 220 Belgian beers from 80+ Belgian breweries, and this year’s event is expected to be even bigger.

So, that brings us to what we're doing. This year Artisanal Imports announced its sponsorship of the first annual National Belgian Beer Week (July 14-21), and we were excited to join in. We will be featuring flights of Belgian beers all week long and on Tuesday, 7/18 we will be giving away various Belgian glassware when we open at 5pm.

As of Monday our Belgian Flight looks like this, but it will most likely be changing once beers start kicking...