To kick off a whole month of IPAs, we're gonna fool you. Yep, on April Fools Day we will hold another Blind IPA Challenge. We'll serve you 6 IPAs,  give you the names of them, and you try to tell us which is which. Think you can? Probably not. The winner will get a gift card to both BLAH and TIGER!TIGER! (If there are multiple winners the prizes will be split equally, but we're banking on the fact that non of y'all will get 'em all right!) 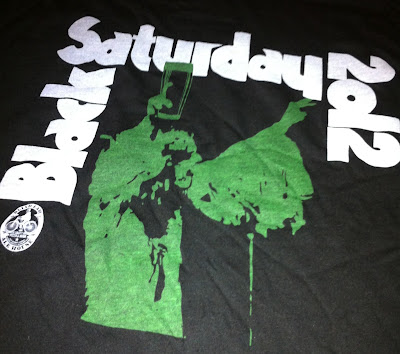 At last count we have 13+ Black Craft Beers to tap for St. Paddy's Day.

Also on tap, you can find everything from Black IPA to Black Lager (aka Schwarzbier)...and even Black Tea (iced tea from Halcyon Tea:) !

Oh, and don't miss our on the limited edition BLACK SATURDAY t-shirts. They're a total Black Sabbath rip-off and they're awesome. We printed just 10 dozen (120) shirts.

GUINNESS?
Not at BLAH or T!T! We're serving Black Craft Beers only. If you want a Guinness, head over to one of our Irish neighbors and get yourself a proper pint. Ould Sod has been called the best pint in town by most of our Irish friend. So, say "hi" and don't be surprised if you see us squeezed in the corner.

Three years in a row Blind Lady Ale House has been rated as one of Draft Magazines 100 Best Places in America to Drink Beer. So, it's fitting that San Diego's best Beer Club will celebrate it's 4th anniversary at BLAH to taste some of the best beers of San Diego and beyond.

Beer Tasting will include two flights of six 5 oz tasters (or 4 single beers) and the food tasting will include a buffet of Blind Lady pizzas. This will be a CityBeat Beer Club exclusive event and only 150 of Blind Lady patrons will be able to attend this one, so get your tickets before they are sold out. Last year this event sold out and was crazy fun. That's why we're doing it again.