The Anniversary festivities
- and there ARE festivities -
will begin on Monday, January 28 and run through Sunday, February 3rd.

The BLAH ANNIVERSARY AUTOMATIC BEER DINNER
Monday, January 28th, 6:30pm
This year's beer dinner will feature FOUR Automatic Beers. Those four beers will be served with an all Vegan meal. Tickets are $75 a person and include all four beers, the lovely meal and gratuity. You must pre-purchase tickets.
• UPDATE: We've slightly updated the menu and beer info is starting to trickle in... 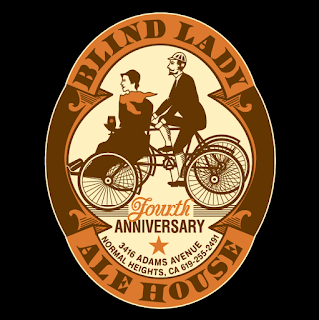 Tuesday, January 29th, 5pm
AUTOMATIC BEER RELEASE
Automatic Brewing Co - Quadracycle Belgian StrongMore info TBA
• RARE BEER LUNCH DAY #1
Tuesday will kick off our Rare Beer Lunch Week. At 11:30 each week day this week we will tap a rare beer. Tuesday's beer is Firestone Reginald Brett. It's their double DBA with brett! This is a 13% abv beer so after lunch you may need a nap....

Wednesday, January 30th, 11:30 - close
BLIND SOUR CHALLENGE
Remember our Blind IPA Challenges? This will be kinda sorta like that but not. Instead we will have a flight of sours and it will be up to you to match the brewery with the tasty sour in your little glass.
I was thinking of the following 6 beers in the flight:
Cuvee Jacobins
Rodenbach
Echt kriek
Oud Beersel Framboise
St Louis  gueuze fond tradition
Beachwood Tart Simpson
• RARE BEER LUNCH DAY #2
Wednesday's rare lunch beer is the 16th Anniversary Ale from Firestone Walker. It scored a perfect 100 on Rate Beer. And an "Exceptional" on Beer Advocate.

Friday, February 1st, 11:30
PROGRESSIVE CASK DAY
It's our classic Progressive Keg Friday but amped up with CASKS! $2 till 2pm, $3 till 3pm and so on.
Saturday, February 2, 10am
THE SECOND ANNUAL CAPE RUN
Last year we had a wildly successful 5K Beer Run (inexplicably with capes!) This year we will repeat, but with a few tweaks. There will be THREE teams and they will be delineated by their color headbands, which you will receive if you PRE-SIGN-UP. (You will also receive and Anniversary Tee Shirt and FOUR beer tickets, if you sign up ahead of time.) Each team has a different map to the same four bars: Toronado, Livewire, Tiger! and BLAH. This way we will not overwhelm any one bar, and yet, we will. You will pass other teams along the way. You will drink a beer at each stop. You will return back to BLAH, in your headband and tee, a little juiced up and sweaty. And you will inexplicably wear a cape, if you remember to bring one. To participate if will cost you $44 - four bars, four beers, four years, plus the cool tee and sweatband!Purchase Tickets to the Cape Run on Brown Paper Tickets Now!
• RARE BEER LUNCH DAY #4 - the DOGFISH HEAD FLIGHT EDITION
Starting when we open at 11:30 am we will have a mini flight of Dogfish Head beers that include their Immort Ale (an English Strong Ale), Hellhound on My Ale (a superhopped ale) and Birra Etrusca (an "anceitn" ale). We will be serving these in our "Tiger!" flight glasses.


THE FOURTH ANNIVERSARY TOWNIE RIDE
Sunday, February 3, 10am or TBD
We love bikes. We love riding them fast but we also love riding them leisurely through the streets of our wonderful neighborhoods. We are gathering at Blind Lady in the morning (time to be announced, but likely around 10am) to ride around as a group and enjoy that San Diego air.  And it costs nothing, no Brown Paper Tickets to buy because we are giving you nothing but camaraderie and community and that is free. This is also SUPERBOWL SUNDAY and what better way to start that day than with some fresh air and exercise?

Whew. Thanks for four great years. Here is to four more!
Posted by blind lady

This January marks our 4th Anniversary. Keep your eyes out for a list of events being posted soon for the last week of the month. Think 4th Anniv beer release from Automatic Brewing Co, running with capes, 4th Anniv keeper glasses and a lot more. Cheers to 4 more years!
Posted by blind lady