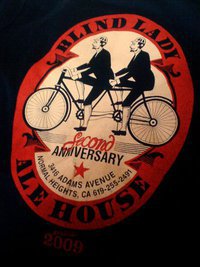 Here's where we're at with planning our 2nd Anniversary Event.
EVERYTHING IS SUBJECT TO CHANGE!
That's just how we are.
We will be creating individual facebook Events for all the nights/events. So stay tuned.

Wednesday, Jan 26th
Extra Event – Special Russian River Flights: Temptation, Consecration, Redemption, Damnation, Blind Pig and RR IPA.
Release of 2nd Anniversary T-Shirts and Postcards
T-shirts will be long-sleeve.
Grab a postcard, write a note to a friend, get a stamp at the food register and we'll mail it for you the next morning. The OG check in.


Thursday Jan 27th, 5pm
THE VERY FIRST BEERS
To celebrate the very first beers we ever tapped at BLAH, we are serving H24 Flights and having a very special BLAH/H24 Collaborative Glass giveaway.
The first 155 people (of legal drinking age – one glass per person) through the door will be given a glass and be able to purchase  $2 glasses of H24 Alt and Orange Wheat until the kegs are empty.
facebook event


Friday, Jan 28th, 11:30am
2ND ANNIVERSARY GLASS GIVEAWAY & LUNCH
We’ll open at 11:30am for lunch and give away 155  2nd Anniversary Glasses. One glass per person of legal drinking age. (An additional 100, or so, glasses will be available for $5 each)
facebook event
Friday Night - TBA


Saturday Jan 29th, 1pm
DRINK WITH HANGAR 24
The brewers and staff of H24 (50 of ‘em) are getting on a bus and heading down to BLAH to eat and drink with us. Oh, and they’ll be bring a special Cask with them.
facebook event

Sunday Jan 30th, 11:30am
AUTOMATIC BREWING CO RELEASE PARTY
Release of Automatic Imperial Brown Growlers and T-shirts.
The first 50 people to pre-order their growlers through Automatic Brewing Co facebook for $22.99 will get a numbered bottle of out newest release. These will be the ONLY growlers available of this beer.
There will be no re-fills sold.
Growler pre-order info TBA.
We are also planning to print shirts on demand, live during the event. These shirts will be printed at the event and will only be available that day.
facebook event