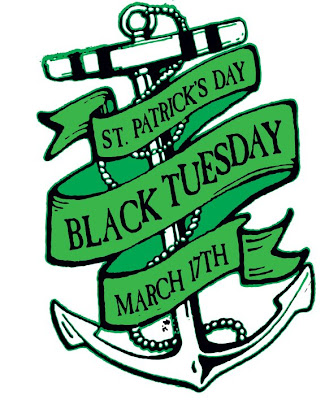 We ain't Irish, but we love beer.
So on March 17th we are opening at 2:00 so that you may start your drinking early (food will be on after 5) and we have a lot of local stouts tapped or on deck to be tapped, including a few from Ballast, the Old Rasputin from North Coast, Hangar 24's Porter, Lost Abbey's Serpent, Alpine's Captain and Pizza Port's Truck Stout. Oh and from now on the imperial stouts will be served with a small square of dark chocolate (until we run out!)

And of course the Ould Sod's pint o' Guinness is just a block away (and Rosie's next door will be doin' it green-style as well.) It's a nice street to spend St. Patty's Day on.
Posted by Are We There Yet?